Personal Information:  John Clinton was born in Glasgow, Scotland on July 3, 1898. He had fair complexion with gray eyes and brown hair.  When he enlisted at the age of eighteen he stood at five feet, three and a half inches tall.  When Clinton enlisted with the 156th Battalion on 18 March 1916 he listed his occupation as a farmer.  He was also a Presbyterian.[i]  He was single.

Before emigrating to Canada from Scotland, John Clinton was a member of the Boys Brigade which was a volunteer youth movement started in the 1850s that originated in Glasgow.  This youth movement promoted the outdoors, camping and leadership for boys in urban centres.

Military Movements:  Private John Clinton trained with the 156th Battalion in Canada.  He boarded the S.S. Northland[ii] on October 18th, 1916 in Halifax and landed in Liverpool, England 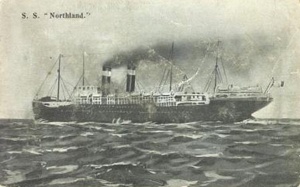 on the 28th of the same month.  Shortly after arriving at Witley training camp, Private Clinton was transferred to the 120th Battalion and moved to Shornecliffe training camp where he would remain until he was transferred to the 2nd Battalion and shipped over to the battlefields of France on June 25, 1917.[iii]   Clinton was at the front for just over a month before he was seriously wounded just prior to the Battle of Hill 70 in the town of Loos.

Medical Records:  According to the service personnel file of Private John Clinton he was never admitted to a hospital or clearing station during his time as a soldier in the Canadian Expeditionary Force until he suffered multiple gunshot wounds to his head, shoulder and chest which were inflicted on 27 July 1917 in the lead up to the Battle of Hill 70.

Stretcher-bearers removed Private Clinton from the battlefield and took him to Casualty Clearing Station # 7 where he was reported to be ‘dangerously ill’ from his wounds.  He was transferred to the 59 Stationary Hospital at St. Omer, France on 8 August 1917 and eventually back to England to a hospital bed at Queen Mary Military Hospital in Whalley Lanes, England where he succumbed to his wounds on 6 September 1917.[iv]

Final Days:  On 22nd July the men of the 2nd Battalion were safe and secure behind a railway embankment with the notable exception of long range German shells fired along the railway line causing minimal damage.  That night the men were ordered forward to relieve the 15th Battalion in the front line north-east of the town of Loos which was strategically important for the coal mines that lay below and to better the position of the Canadian front line for the Battle of Hill 70.[v]  In the front lines, the men of the 2nd Battalion suffered from the intense violence of German shelling, trench mortar rounds and machine gunning.  The 2nd Battalion would endure this pounding by German armaments from the 22nd of July until the 2nd of August.  These eleven days saw the men engage in trench fighting, trench raids carried out the enemy, severe armament fire and significant gas shelling.  When the battalion was finally relieved on 2nd August many men had to run through an open gauntlet of intense shelling to the relative peace of bivouacs.[vi]   According to the Battalion history “German shells crashed into the area through which the companies of the Second were moving, and casualties resulted.  Scrambling over blown-in trenches, barbed wire viciously ripping them, stumbling through shell-holes, and breathing the mingled odours of high explosive fumes and mustard gas, mixed with that of the dead bodies with which the area was littered, the companies staggered fitfully forward.   Despite the staggering losses, a new forward position that was gained placed the Canadians in a stronger position to attack Hill 70.[vii]

Unfortunately, on 26th July Private John Clinton would be struck by shrapnel and bullets.  He would suffer for more than a month before succumbing to his wounds.

John Clinton was fatally wounded in the lead up to the battle of Hill 70.  As a result, his death rests between the battle at Vimy Ridge and Hill 70.  These soldiers can be lost in history because they are not directly connected to a battle.  It is important that this does not happen and that we remember the sacrifice of soldiers like Private John Clinton of Merrickville, Ontario.  Lest We Forget.