George Dunbar Acton was born May 17, 1894 in Liverpool, England. He was the oldest of seven children to his parents George and Louisa. His siblings included: Louisa Dunbar, Alice, Harry, Charles James, Hannah May, and William Arthur. His father was a carriage maker[i], and George grew up to be a painter.  He had blue eyes, a fair complexion and dark brown hair and was an Anglican. He was baptized at St. Cyprians, Edge-hill, Lancashire on September 23rd the same year he was born.[ii] He attended the British School in Old Street, before going onto Ludlow Grammar School as a scholarship boy. He was also a bell ringer at St. Lawrence. The family moved to Ludlow in 1902-1903. In 1911 he lived at 94 Old street, then immigrated to Brockville, Ontario, Canada in February 1913.[iii]

George enlisted in the Great War on September 4, 1914, in Valcartier, Quebec. I speculate he signed up so early in the war because he felt obligated to fight for his country of birth – England. After all, he had only been in Canada for just over one year and probably still felt a strong allegiance to England. His attestation declared he was 20 years old at the time, was 5 feet 5 inches tall, and was not married. His next-of-kin lived on 167 Pearl St. East, Brockville.[iv]

He boarded the S.S. Cassandra,[v] a steamship that was built in Greenock, Scotland. The Cassandra served as a troop ship during the Great War. She carried approximately 2000 soldiers 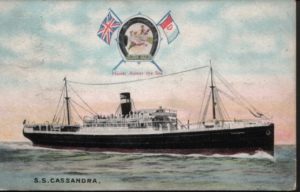 belonging to the 2nd Battalion, (1st Brigade) along with some of the #2 Field Ambulance personnel, and cargo loading in Halifax on September 26, 1914, embarking on October 3rd as part of the first contingent of men and material for the war.  The S.S. Cassandra arrived in Plymouth, England on October 14th the same year. The original route to Southampton was changed due to German submarine sightings in the English Channel.  The Cassandra completed unloading on October 25, 1914.[vi]

When his unit sailed he belonged to the 41st regiment more commonly known as the Brockville Rifles, a long-standing militia that still exists today. The Brockville Rifles are composed of militia units and would not be out on the battlefield as they were a training battalion rather than a fighting battalion but supplied many well-trained soldiers to combat battalions.[vii]  George Acton received his first wound at the 2nd battle of Ypres, a gunshot in his left thigh. The 2nd Battle of Ypres is remembered as the first time that poison gas was introduced as a weapon of war.  The town of Smiths Falls lost five young soldiers at this battle.  The bodies of four of the five soldiers have never been found but they are commemorated on the Menin Gate in Ypres, Belgium.

As a result of his wound, George Acton was sent to the Southern General Hospital from April 27- May 5, 1915, then immediately sent to Countess of Suffolk Military Hospital in Charlton Park in Malmesbury, from May 5, to June 1, 1915. His thigh wound became infected and the medical records indicate that threads from his pants were discovered and removed from the wound and an iodine bath administered to combat the pus that was oozing from his wound.  On April 28, 1915, he wrote a letter to J Barker, his headmaster at the British School, Old street. It was published in the Ludlow Advertiser May 8, 1915.

“No doubt you have been wondering whether I managed to live through the big battle last Thursday, Friday and Saturday. I was wounded on Saturday afternoon, bullet went in my left leg, just below the thigh and out again on the other side. I am going on fine and also enjoying myself. Hope I shall be able to get up in a few days. I may possibly be in Ludlow before returning to the front and if so will come and see you.”[viii]

From June 1st to June 7th he took a week-long furlough, then returned to duty in Shorncliffe on June 10th.  On June 11, 1916, the 1st Canadian Convoy Division transferred George because he had a nervous strain.  He was sent to the Number 2 Canadian Field Ambulance for this condition from June 16th to July 1, 1916. With this date being so close to the Somme, a battle that he did participate in, I predict that he was nervous about the upcoming events or was beginning to show symptoms of what is now recognized as post-traumatic stress disorder.

During the Somme battle he received three major wounds. His first was a shrapnel wound to his right elbow. He was then sent to the 3rd Canadian General hospital in Boulogne, France from July 27 to August 8, 1916. He rejoined his unit on September 5th. His second wound was a gunshot wound to his left elbow. He was treated medically at the 1st Western General Hospital, Tranmere Aux, in Liverpool from September 28 to October 20, 1916.  His third wound was a shrapnel wound to his left elbow where he was sent to the General hospital for 3 weeks, then to Canadian Corps Army Depot in preparation for returning to active duty.[ix]

George was struck off strength and transferred to the 6th Reserve Battalion on January 24, 1917, but that was short lived because he was then taken on strength to the 2nd battalion on March 6th the same year, just prior to the Canadian fighting at Vimy Ridge where the battalion would fight in the 1st Division but he would emerge unscathed by the action. He was promoted to Corporal on June 1, 1917. This is probably due to his extensive combat action.

George died August 15, 1917, the first day of the battle of Hill 70. He was 23 years old.  According to the war diary, flanking the brigades to the north was the 46th Imperial Division. The assaulting troops were to remain at the back with three major trenches in front and parallel with each other as the enemy had defence in depth as part of their advance.[x]   The advance would be staggered with the troops moving from one trench to the next holding their position and preparing for a German counter-attack.  The battalion was well prepared due to extensive bayonet and machine gun training in the weeks before the attack.[xi]

In the Circumstances of Death registry, it stated that the battalion moved from local billets in Les Brebis to the frontline trenches in the Loos sector.  It was during this advance that George was killed in action.[xii] It was recorded in the war diary that August 15th was a productive day, casualties were not excessive, and the number of prisoners taken was considerable. Overall the attack was considered successful and rocked the enemy back on their heels.[xiii]

Because of George’s early enlistment date, he was eligible for the 1914/15 star. This went to his father, as well as his plaque and scroll. Typically, if you receive this medal, you also receive the British War Medal and the Victory Medal.  He is buried at Bully-Grenay Communal Cemetery in the British extension, Pas de Calais region, France. His grave reference and plot is: I.V. E.9.[xiv]  He is also on the Brockville, Ontario cenotaph.  George was a prime example of a good soldier. He took orders and executed them well. He participated in numerous battles and perhaps, therefore he seemed to be showing early signs of PTSD that the military failed to recognize. George left behind both parents and was an older brother to six younger siblings. He was taken too soon and had much more to offer not just to his family but also his community.  His potential was lost to the nation.   Lest We Forget.