Personal Information:  Arthur Tyo was born on 1 June 1888 in Williamstown, County Glengarry just outside the city of Cornwall, Ontario.[i]  Arthur’s parents, Stephen and Annie, had five 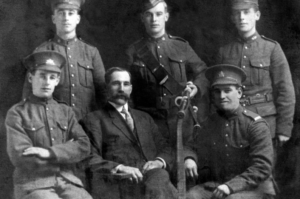 sons who enlisted in the Great War including Stephen Arthur –standing left-, Joseph, James, Edward- left seated- father Stephen  and William.[ii]   When Arthur enlisted on 15 July 1915 he was five feet, seven inches tall. He was Roman Catholic. He was a labourer.  Stephen Arthur’s wife Mary would never see her husband again when he left Canada for England on 1 April 1916.

Medical Records:  Arthur Tyo had a range of medical issues.  Although he was declared fit for duty when he enlisted Arthur developed scabies in December 1916 and this would re-occur in May 1917.[iii]  In July 1917, he suffered from Impetigo which would keep him in a Casualty Clearing Station for more than eight weeks in total dealing with scabies and impetigo.   After being cleared for duty in late July, Private Tyo returned to his unit just before the Battle of Hill 70.  According to his personal records, on 17 August 1917 he suffered from several gunshot wounds to his legs.  He was evacuated to the #22 Casualty Clearing Station but died at 3:25pm from his wounds.[iv]

Military Movements:  Arthur Tyo enlisted on 15 July 1915 with the 59th battalion which was a training battalion.  On 1 April 1916 he left Halifax aboard the S.S. Olympic, the sister ship to the famous Titanic, arriving in Liverpool, England on 11 April 1916.  Arthur began the final leg of his training at Shornecliffe training camp.  Two months later, Tyo was taken on strength to the 24th Battalion which was a fighting battalion and he was transferred to the front in France and Belgium.  However, in October 1916 he was transferred to the 1st Tunneling Company but by end of January 1917 he would return and stay with the 24th Battalion until his death on 17 August 1917 at the Battle of Hill 70.

On August 15th, the Canadian battalions, including the 24th Battalion, were given strict orders of preparation which each man carrying two water bottles, 120 rounds of small arms ammunition and that no unnecessary daylight movement or light at night time to ensure that the position of the 24th Battalion was not compromised.

According to the war diary, on the morning of the 15th August the men were held up by German machine gun fire resulting in a breakdown in communication between the Companies of the battalion.  In a series of quick notes back and forth between headquarters and the forward positions, the men of the 24th had to attack the machine gun posts with Stokes mortars.  This was essential as gaps in the line began to emerge but these were closed.[v]

The runners moving back and forth suggest that the fighting was intense and in some cases confused as pockets of soldiers endured enemy artillery, machine gun fire and enemy aircraft firing on the men on the ground, as well as snipers hiding in the debris of the city of Lens.[vi]

The war diary of the 24th Battalion reveals that the battle was based on the attrition of the German army.  In a correspondence between the General Officer Commanding (G.O.C.) of the 2nd Canadian Division and the 24th Battalion he states, “While we have to deplore that loss of the gallant officers and men, we may rest assured that, for every individual we have lost, the enemy have lost at least four, if not more.”[vii]

When the 24th Battalion was relieved on the night of the 17th/18th by the 22nd Battalion the men of the 24th had suffered 4 Officers killed, 4 Officers wounded, 37 Other Ranks killed, 234 wounded, and 36 missing.  Of the men killed, Stephen Tyo was noted as being killed in action.[viii]

Lest We Forget:  According to his will Stephen Arthur Tyo left all of his belongings to his wife Mary Tyo and their children.  Mary lived on 7 Street in Cornwall, Ontario. His mother Annie would receive his memorial cross and plaque and scroll.  Stephen Arthur Tyo is buried at Bruay Communal Cemetery Extension in the Pas de Calais region of France.[ix]