Personal Life:  Frank Everet Morrissey was born on 12 June 1891 in Smiths Falls, Ontario to his parents John and Catherine Morrissey. 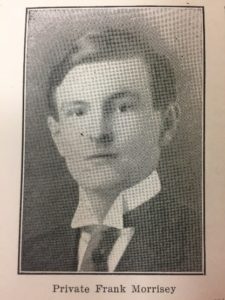 Frank attended Smiths Falls District Collegiate Institute throughout high school and received his diploma.[i] He worked as a teacher at a school in Ryley, Alberta until he was 25 years old and enlisted with the Canadian Expeditionary Force on 17 June 1916. He was 5 feet 8 inches tall and weighed in at 163 pounds. He had fair complexion, brown eyes, and dark hair.[ii]

Medical Records:  Medical examinations showed Morrissey’s chest expansion was 3 ½ inches which means he had super healthy lungs. Frank had never been admitted to a hospital or medical facility in his time with his battalion.[iii] Frank Morrissey was killed at Hill 70 but his body was not found but searching back on military books about his battalion, they were bombarded by heavy artillery and his body possibly could have been hit by one of those artillery rounds. That is why his body is on the Vimy Memorial in Pas-de-Calais, France.  The Vimy Memorial is dedicated to all Canadian soldiers killed on French soil but the body was never recovered.

Military Movements:  Private Morrissey was enlisted with the 202nd Battalion until 13 November 1916 when he was transferred to the 175th Battalion which was a training battalion. 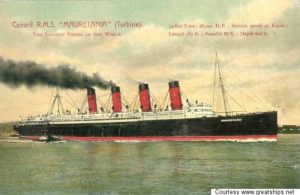 Final Days:  Frank fought very courageously on the front line of the 50th Battalion for about 3 months. On 18 August the Canadian position in Lens, France was not very secure. The 4th Division slightly moved it posts just outside of Lens. They then extended its front north, towards Bethune Road. Canadian General Arthur Currie decided to clear the situation in front of Lens on the lower southern slope of the hill. The 2nd and 4th Divisions were going to be used for this operation.   On the right side of Bethune Road, the 4th Division was ordered to attack south-eastward into Lens, heading towards Arras Road. Guarded by the trench lines of Aloof, Aconite, and Alpaca, about 3000 yards of the enemy’s front line, would be occupied if everything went as planned. [vi]

On the morning of 20 August, the 2nd Canadian Division reported that enemy troops were leaving their trench system code-named “Aloof”.[vii]  Armed with this information, the Canadians made plans to immediately occupy the trench which would assist the attack planned for the morning of the 21st.  However, despite a barrage of artillery on the trench system and forward movement of Canadian infantry, a German counter-attack drove the Canadians back to their starting point.  The 50th Battalion suffered 50 casualties in this action.[viii]

The attack was abandoned until the morning of the 21st but the action of the day before alerted the Germans who were ready and began a heavy bombardment of artillery, machine gun fire and poison gas resulting in casualties of 4 officers and 110 other ranks (OR) before the assault had even started.  Despite these losses the attack went forward at zero hour (4:30am) but communication quickly broke down between companies while increased German machine gun fire forced the battalion to return to the jumping off line.  The retreat inflicted more casualties as the men moved out in the open allowing for machine gun fire to cut down the men leaving only 138 soldiers remaining and the flanks of the battalion open to attack.[ix]

At 6:00pm on the 21st the artillery in support of the Canadians opened up a barrage on the battalions flanks and the remaining men pressed forward but German counter-attacks forced the men back to their starting point.  The war diary notes that at one point only 7 soldiers actually reached the final objective and realizing that they could not hold the position made their way back to the jumping off line.  Exhausted and in need of water and food no other action was taken.[x]  As roll call was taken, Private Frank Morrissey was missing.  Parties were sent out to collect the wounded and identify the dead but the body of Frank Morrissey was not found.

Lest We Forget:  Private Frank Morrissey is commemorated at the Vimy Monument which is within sight of where he was killed. His Victory medal and British War medal were sent to his mother, Catherine Morrissey.  The Battle of Hill 70 is a forgotten battle but my research on Frank Morrissey means that his efforts and sacrifice will not be forgotten.