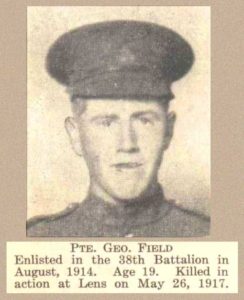 and his younger brother Alfred James Field who fought and was killed early in the war.[i] Alfred was reported missing on April 22nd during the Second Battle of Ypres.[ii] Two months after his brother’s death, on June 1, 1915 George enlisted for war in Smiths Falls. He was 21 years old. Some say that George enlisted to go find his brother.  Before he enlisted he was a labourer making $1.20 a day. He had previous military experience in the 42nd Regimental Guard in Petawawa.  He had a fresh complexion, was 5 feet 7 inches tall with blue eyes and light brown hair. He was Roman Catholic and was single.[iii]  Photograph of Private George Field compliments of Our Heroes of the Great World War.[iv]

Military Movements:  George Field’s regimental number was 410270. George enlisted with the 38th Battalion of the Royal Ottawa Unit, 4th Division of the Canadian Expeditionary Force on June 1, 1915.[v] On August 1, 1915 the 38th battalion boarded the SS Caledonian to go to Bermuda as part of the garrison protecting the harbor for British war ships. Twelve days later on August 12, they arrived in Bermuda for garrison duty. They stayed in Bermuda until May 30, 1916 when the 38th battalion left Bermuda on the SS Grampian[vi] heading for Liverpool, England where the battalion would join other battalions for 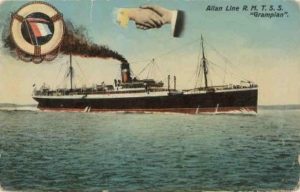 On November 4th the battalion was inflicted by heavy machine gun fire and George was wounded in the thigh. The battalion was set up in the left section of Regina trench – the longest trench system on the Western front. The 4th Division advanced a mile in-depth on a 2000-yard front. From November 4th to 8th 1916 George was in the Field Ambulance Infirmary with this thigh wound. On November 18, 1916 the battle of the Somme ended when British commander Douglas Haig called a halt to his army’s offensive due to winter.[ix]  The 38th Battalion and the rest of the Canadian divisions would be transferred to the Arras sector in France in the area known as Vimy.

George’s next battle experience was at Vimy Ridge.  At 5:30am on April 9, the Canadian Corps would advance against the German trench lines at what became known as the Battle for Vimy Ridge. In the battle of Vimy Ridge, 3, 598 people died, 7, 004 were wounded, 4, 000 were captured. After Vimy ended on April 12 the 38th Battalion went to Arras to fight in the Battle of Arras. On May 16th, the Battle of Arras ended.[x]

Medical Records:  George was fortunate, he only had one injury in his journey of war. Near the end of the Battle of the Somme, on November 4, 1916, a piece of shrapnel from a mortal shell came and tore a piece flesh out of left thigh. He stayed in the Field Ambulance Infirmary for 4 days and on November 8 he rejoined the regiment to finish fighting in the Battle of the Somme.[xi]  Shortly after Vimy, on May 26, 1917, he was exposed to deadly phosgene gas causing heavy coughing, eyes burning, burning throat and lungs. The Germans gassed the 38th battalion in the Souchez- Avion Sector. George was one of the 12,000 Canadians that were killed from gas poisoning.

Final Days:  After the Battle of Vimy Ridge, the Canadian army had to prepare for the Battle of Souchez and Hill 70 along a fourteen mile front from Gavrelle to Hill 70 in the city of Lens.  Between May and August 1917, this front saw Germans harass the Canadian battalions with flamethrowers, attacks and counter-attacks, concentrated artillery barrages and hundreds of canisters of poison gas shells fired into the Canadian lines.

As for Private George Field and the 38th Battalion, at approximately 9:45-10:00 pm on the night of May 25, 1917 the 38th Battalion witnessed concentrated enemy movement on front of their position in the Souchez-Avion sector which is just to the south-west of the city of Lens, France.  The night bore witness to German airplanes that flew over and bombs were dropped but there were no casualties. Then in the early hours of May 26th portions of the area where the 38th battalion was located in the front lines several gas shells were fired from German artillery. [xii]  George suffered from the gas poisoning and would succumb to his wounds that same day.

Lest We Forget:  George died on May 26, 1917. He was 23 years old. He was buried in the La Chaudiere Military Cemetery, located on the North-western outskirts of the village of Vimy, France. His grave reference is plot 4. Row A. Grave 11 (IV. A. 11).[xiii] His will states “in the event of my death I give the whole of my property and effects to my mother Bridget Field”.[xiv] George received the 1914/15 Star medal, the 1914-19 Victory medal and the 1914-20 British War medal. The medals were also given to his mother.  In his years of fighting his pay rate was $1 per day and $0.10 as field allowance per day.[xv] Mr. and Mrs. Field were pained with losing both their sons so early due to war.

To be killed by phosgene gas would be awful.  A soldier would be quite helpless after a gas attack as his body would be covered in blisters and lungs scarred and filling with mucus.  The brutality of war can be seen in the wounds of shrapnel or machine guns but the slow death due to poisoning seems inhumane.  Some weapons that can be developed for war should not be allowed.

[viii] Wikipedia, Battle of the Somme.  Information accessed at: https://en.wikipedia.org/wiki/Battle_of_the_Somme