Personal Information:  Sidney Holland was born in 1884 to Thomas and Rebecca Holland of Leighton Buzzard, Bedfordshire, England.  After immigrating to Canada, Holland worked as a pipe fitter in Smiths Falls, Ontario.[i]  Sidney stood a proud 5 feet 6 inches tall with blue eyes and light brown hair.  He was 30 years old when he enlisted on 19 September 1914 at Val Cartier, Quebec.  The early date of enlistment signifies that Sidney Holland was part of the first Canadian contingent to leave Canada’s shores on 3 October 1914 to fight in France and Belgium.

Military Movements:  Sidney Holland enlisted early in the Great War.  He trained at Val Cartier, Quebec between September and October 1914.  On 3 October the first 32,000 Canadian soldiers left Quebec for Avonmouth, England.[ii]  Sidney Holland and the rest of the 1st Brigade of the Canadian Field Artillery sailed aboard the S. S. Manitou[iii]. 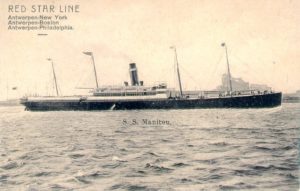 Holland fought throughout a number of battles including (2nd Battle of Ypres, Belgium (April 1915) where poison gas was used for the first time in warfare, Mount Sorrel, Belgium (Hill 62 in June 1916), Courcelette, France (October 1916), Vimy, France (April 1917) and finally Hill 70 (Lens, France August 1917).  Throughout his military experience he was never wounded or hospitalized.[iv]

On 10 September 1916, Sidney Holland was promoted to the rank of Corporal a week before the battle of Courcelette where tanks were used for the first time in warfare.  Holland enlisted and remained in the 3rd Battery of the Canadian Field Artillery from September 1914 until being killed in action in August 1917.

Final Days:  Corporal Sidney Holland was fighting at Hill 70 in the outskirts of the city of Lens, France when he was killed.  On the second day of the attack Sidney Holland’s artillery gun was hit by German enemy shell fire.  Sidney was wounded on 16 August 1917 and taken to the No. 3 Canadian Field Ambulance where he succumbed to his wounds and died.  On 16 August, the 1st Brigade was ordered to begin an intense barrage of 18 pounder guns at 4:05 pm and continue until 4:25 pm at which time the brigade was ordered to move forward at jumps of 100 yards to maintain a creeping barrage to shield the advancing Canadian infantry.[v]  Each gun in the barrage was firing at a rate of three rounds per minute until ordered to stop.  According to the war diary of the 1st Brigade CFA the guns were under heavy machine gun and rifle fire and it is at this time that Corporal Sidney Holland was wounded.[vi]

Lest We Forget:  Corporal Sidney Holland received the 1914-15 Star medal for enlisting early in the Canadian Expeditionary Force.  He also received the France and Belgium star, the British War medal and the Victory medal.  Unfortunately, Holland would never see these medals but they were sent to Miss E. Taylor of 21 Lake Street in Bedfordshire, England.  Holland’s plaque and scroll were sent to his father, Thomas Holland of 12 Vandyke Road, Leighton Buzzard, Bedfordshire, England.[vii]

Corporal Sidney Holland is buried at Bully-Grenay Communal Cemetery, British Extension in Plot IV, Row E, and Grave 13.[viii]  He was 32 years old at the time of his death.  Before his death the men in his battery would most likely have respected the fact that he had enlisted early and fought in numerous battles unscathed. He would be able to keep the younger men calm and support the men as they work through the hardships of combat.